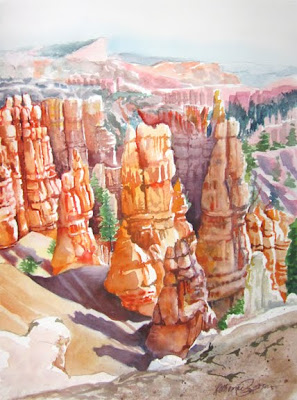 The photo this painting is based on was taken during a semi-cloudy day in Bryce Canyon. Any day there is an extraordinary day. The rock colors are particularly difficult to capture. They change moment by moment as the light moves around them. In this painting I used a series of reds from warm to cool to show the subtle light play. The rocks with the most sun on them are the warmest, including the shadows. That is the most difficult concept to understand. The shadows are actually much warmer than normal. I believe this is due to the bounced light from the red rocks themselves. It's not apparent in the photo, as the camera tends to interpret shadow as a cool tone, but since I was there, I remember the colors vividly.
Using watercolors to depict reds can be challenging. The color rarely dries with the intensity that you intended, and placing a second coat on the painting often takes away the freshness. I found myself using colors directly out of the tubes for this painting. Colors like Scarlet Lake, Opera Rose and Vermilion were placed directly on the image and then I held my breath as they slowly lost some of their intensity. In some cases, I removed a tiny bit of the brilliance by placing a cool tone quickly over the top before it was completely dry, or I removed some of the color with a dry brush after the image had dried. I hope you like the results.