Messages from the Other Side 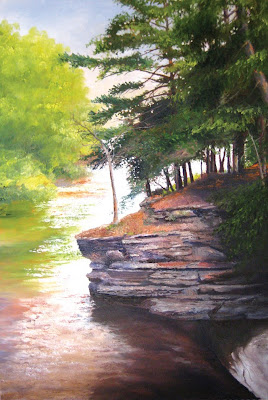 Every now and then, I revisit some of the writings I made during my stay in the Porcupine Mountains. This extended time alone in the woods served as a wake up call for me not only as an artist, but as a human being. I was an artist in residency for two weeks and rarely left the woods for anything except the bare necessities.

However, after a week and a half in the woods, I suddenly longed for contact with the outside world. I needed to get back in touch, and I kept hearing the nagging voice of responsibility directing me to check my phone messages. " I rummaged through the stuff on my passenger seat in the car and located my cell phone. But, it didn't even display a reception bar. Instead, It said sadly "searching for service." And it kept displaying that same message no matter where I drove. In fact, I started to feel a little sorry for it, because I knew it would never find the service it was seeking.

My last link to the civilized world had been in a little town called Ontonagon. A town that was proud to announce that the most exciting thing to happen to it in the last 40 years was the addition of a Pamida store. In Ontonagon, I got two bars on my cell phone and I sat in the parking lot of the Pamida to check my messages.

The first time I checked messages I felt like a child playing hooky from the rest of the world. I felt guilty hearing my client's responsible work related messages and urgent pleas for my services. I had to call them back and leave messages that I was unavailable for a few days. In most cases, I didn't want to tell them where I was or what I was doing. Being in the wilderness seemed so much less important than what they were trying to accomplish. In one case, I even told them I was in the U.P. working on a project, although what I was actually doing felt very far removed from any work I had ever known.

But all feelings of guilt had vanished by the time I got around to checking messages the second time. I listened in detached amusement to the urgency in their voices. One client had called me six times. The first message was in a normal tone, the second time it was slightly more agitated, the second to last message demanded to know where I was and why I hadn't responded, and the last message sounded genuinely worried since it had been four days and I had not answered any of her messages. I called her back first and immediately felt the stress in her voice.

U.P. natives each have a particular way of describing the culture on the other side of Lake Michigan. One said there should be a sign for those leaving the U.P. crossing over the Macinaw Bridge saying: Ye Who Enter Here, Abandon All Hope. Another said that when he crosses over the bridge he waits to see how long it will take before he gets the bird flipped at him for driving too slow. The only birds you see in the U.P. are the flying kind. Another woman said she descends into a depression every time she has to cross over.

It was the stress in these messages from the other side of the bridge that surprised me the most. Everyone seemed to be in such urgent need. I couldn't understand the urgency. None of these things were necessary for survival. None of these messages were about life or death. Everything they called me about in a panic could have waited until I had returned.

Their messages reminded me of my own insane inflexibility when it came to deadlines and appointments. Once on a trip to Italy, I became very agitated when the bus driver made me late to a meeting. He had simply pulled the bus over at an unscheduled stop next to a cafe and gone in for an espresso and a cigarette. I watched in amazement and agitation as all the other passengers got off the bus and went into the cafe with him. Some of them even had pastries with their coffees. After about fifteen minutes in the hot bus, I reluctantly stepped outside to wait, grumbling and cursing them under my breath. Stupid Italians, I thought. How could anybody get anything done in this country if they couldn't even keep a simple bus schedule. When I arrived late to my meeting I was very upset and tried to explain what happened. But, it made no difference to the Italian I was meeting. Oh good, he said, I'm glad you got to have an espresso on the journey. I didn't have the heart to tell him that I had been too upset about being late to our meeting to go in and enjoy a cup of coffee.

Life doesn't give you a guarantee you'll be around even for the next ten minutes. There's an old saying: If you want to make God laugh, tell him about your plans for tomorrow. We only have this moment, now, and no more. So, I'm going to enjoy that cup of coffee from now on and maybe even a pastry, even if it makes me late, because the bus could crash a mile down the road. This isn't crazy or lazy, or irresponsible--it's real, and it's about truly living in the moment. The forest taught me what the Italians couldn't. There's no tomorrow in the forest, there's no time at all. Stand next to a 300 year old Hemlock and watch the second hand tick away on your watch. After a few times around the dial, maybe you'll understand, and then you'll hear the forest laughing.