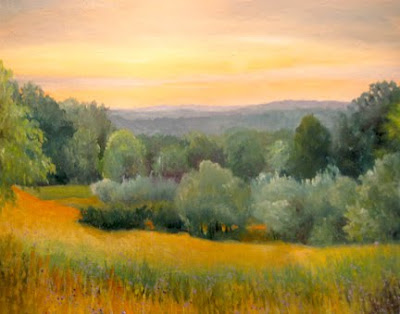 I don't know if all artists go through a reinvention process. I only know that after spending two weeks in the forest alone painting, I came out a different person. Since that time, I have looked at my massive body of work with a mixture of disbelief and disappointment. It's almost as if it didn't come from my hand, but was the work of someone else. Someone who was readily influenced by the demands of clients and was responsive to a public that constantly wanted something other than what they were doing as an artist. Believe me, I have been grateful for the work. And, I have been fortunate to have been able to deliver so many different styles of work for so long. But now, I'm finding that a different voice is speaking to me, a personal one. One that keeps asking: "What do you want to say?" And, I think that's an important question. So, I'm trying to answer it.
Little by little over the past two months, I've made some progress. It's not a verbal process, so it's difficult to express. I've thrown out more paintings the past two months than I've ever discarded in my whole life. And, I've saved a few from disaster by working hours on a tiny canvas in the studio. Something that would have taken me 20 minutes a year ago now takes me 10 hours. What I want to say is right on the tip of my brush...but I just can't seem to get it out.
The painting posted above was done this morning at Kensington. It comes the closest so far to what I want to say. The hard part about all of this is that I don't know how long this reinvention of myself is going to take. It's a process of disassembly, of unlearning, and relearning, of playing and of serious observation. It's wonderful and terribly uncomfortable at the same time...like laughing and crying simultaneously.
What gives me hope is remembering the experience of seeing an exhibit of Degas' work at the DIA. They had x-rayed the works and exposed on separate images the number of times he painted and repainted his masterpieces. In some cases, they said the work was repainted several years after the original work was done. It was shocking to me that a "master" could be so unsure of himself that he had to paint and repaint a work that many times. But, now I find it comforting. Now, when I look about the studio, and I want to repaint parts of paintings that I once loved, I think of Degas. And, I wonder, did he at one point in his life look at his work from earlier years and feel the kind of disappointment and emptiness in them as I feel from mine? I doubt it. But it's still sort of comforting to consider it.