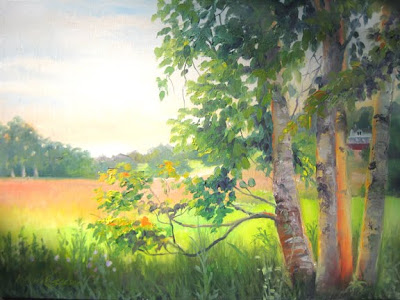 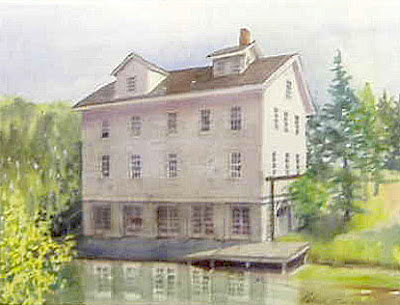 Recently I won the "People's Choice Award" for a plein air painting done up in Glen Arbor, Michigan. It was a multi-challenging 7-hour experience.

After camping with a dog that had never slept in a tent or outside before, and rising at 6am to slam down a breakfast, pack and be at the Art Center by 7:45am, we headed out to select a site (my dog and I). The sun was peaking briefly in and out of the clouds, but it didn't look promising for a sunlit morning. I headed as fast as possible to the shore of Lake Michigan, to a site that I had explored the night before. The scene I wanted faced west, and there was no sign of sun. I couldn't see a picture in it. Driving back on the dirt road, a rare bit of sunlight caught the inside of a three-trunked birch tree and lit it up with orange. I slammed on the brakes and pulled over to snap a photo. Quickly, I pulled out the easel and started setting up, but the easel leg fell off and everything dropped into the dirt. I couldn't locate the pin that held it all together, so I used a display easel that I had brought as backup (always bring backup equipment!). This left all my paint and supplies on the ground, but it was better than nothing. Still blurry eyed, I raced to catch the light. The dog went to sleep on a mat by my easel (after keeping me up all night, he was tired). About an hour later, I was pretty happy with the birch trunks and sky, even though the sun had disappeared in the first five minutes of painting. I had just started on the fields and farm house when another painter pulled up beside us.

She was a pastel artist, and had decided as I did, that the lake front was not fit to paint that morning. She started a rendering of the farmhouse and field. My dog was not happy with the intrusion and decided to start being a pain. (He's a rescue and only a year and a half old) Thank heavens, the car was right next to me. Since it wasn't hot yet, I put him in the back of the car with the windows down. That stopped the constant threat of his chain knocking over my secondary easel. By lunch, both myself and my new artist friend had finished fairly acceptable paintings, and the light had changed too much to continue anyway. We decided to do a second painting at another location. She asked me where I was headed. I told her that I had spotted a large building by the side of the creek the night before, but couldn't imagine then how I would paint it and that I wanted to go back and check it out for a possible watercolor painting. She decided to come too.

The Grist Mill, as it was called, sat close to the road next to a steep drive. There was no way to get a good view of it on the side of the river next to the road. But across the river, I saw an elevated wooded area that looked like it might provide a distant vista of both the river and the building. We went searching for a way across the river and found one through a private gated community. There was a place to park just next to the wooded area…and the view and setting were perfect…except for the mosquitos. The little blood thirsty beasts had spawned by the thousands on the riverbank and they were hungry. I doused myself with bug spray, but didn't consider that my dog was also a viable target. As I set up the makeshift easel, he appeared greatly distressed, swinging his head from side to side snapping at the air and occasionally dropping to the ground to chew on a part of his body. It became very distracting and the buzzing around him was audible. I took pity on him and closed him in the car with the air running, where he fell promptly asleep. Now I could concentrate on what I was there for…to paint this incredible scene.

I set about to mark off the dimensions of the building using standard practices of vanishing points to determine the slant and location of each window. In a building of this type, if the lines are off, it ruins the whole painting. Not planning ahead enough, I had not brought a straight edge to draw the edges of the building, so I used the edge of a blank canvas, a little awkward but it worked. With the drawing complete, I called over to my friend who had set up across the river to see if she had the time. She said it was 2:30. I had less than two hours to finish the painting as we had to be back at the Art Center to frame our work by 4:30 and it takes time to pack up. I started to panic. Why had I chosen such a difficult subject? And why had I brought such a large frame which had forced me to do such a large watercolor! I didn't have any choice at that point, so I just decided that if it looked bad, or wasn't finished I just wouldn't enter it in the show. With self doubt and self-imposed pressure behind me, it became easier.

I masked off the areas that I wanted to keep bright yellow in the foliage and began to paint the building first with broad washes of light purple on the shadow side and then more details on each window laid in with gum arabic to maintain their darkness. Then I transferred the building into the water upside down and before it dried completely, I sprayed it with water and let it drip. Some of the spray splashed on to the building and I liked the effect, so I gave it a little more water. As it dried, I called over for time again….it was 3:45. Time had flown! I picked the painting up and waved it up and down to speed the drying time so that I could remove the masking. That done, I set in on putting the lines in for the siding and shadows around the windows. Then it started to rain! That's the last thing you want when you are doing a watercolor. It this point, I just let the drops fall on the painting, and to my surprise, the effect looked pretty good. My friend called over that it was 4:15 and that she was leaving. I sighed and looked at the painting. I guess it was done, but it looked cold somehow, the purple shadows seemed too strong. Then I did something that I have never done. I took a wide brush and filled it with a very wet mixture of orange and laid it in over the entire shadowed portion of the building and let it drip where it wanted to. The orange immediately toned down the purple and brought a warmth to the shadows and softened all the strong lines. It was beautiful. It was a blessing to not have the time to contemplate what I had done on an impulse, and how it could have ruined the painting. I packed up the car and drove to the Art Center to frame the two paintings.

During the show, I stood behind a couple who were looking at my watercolor. "I can't believe she did that in 7 hours" the woman said. "Actually, I did it in three." I told her, pointing to the birch painting on another wall, I added, "That was my first painting of the day."

The watercolor had not won any of the three prize ribbons, and I was disappointed. But it had sold, so that was good. After about an hour, I left the reception to take my dog for a short walk and passed by some patrons as they were leaving. They looked at my artist's name tag. "Oh, Katherine Larson!" they said, "We all voted for you for the People's Choice Award. Your painting of the Grist Mill was wonderful!" My spirits lifted, I returned to the reception, and shortly my name was called.

It's a wonderful thing to know that the public likes your work, it increases your confidence. But, an even greater result has come from this experience. I have learned to follow blind instincts and not analyze things too much. Taking chances and working through fear to the other side allows one the freedom to experiment and discover. And learning that was worth the whole experience.