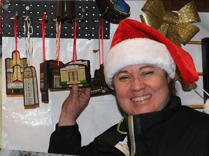 2012 was a challenging and innovative year for me. I explored new avenues and venues. Some of them were lucrative, others not so much. I did my first art fair in Scottsdale, Arizona-- that was a bust. Then I did Ann Arbor-- good show for me. Learned a lot. I'll do it again, but differently. I published my first book in July. I've sold 900 so far! That pretty much saved my year. But the most fun I had this year was making and selling my "Ann Arbor Tiny Townie" Ornaments.  They were little hand-painted versions of Ann Arbor's iconic structures. I sold close to 300 of them! On my last evening Christmas Market of the year, a man walked into my booth and announced that he was Jewish. "I don't know what I'm doing at a Christmas Market" he said, "But I have cash money. What can I buy?" I thought for a moment and then directed him towards my ornaments. "A jew buys a Christmas ornament!" He said in jest. "That would be a first!" Then he spotted my Zingerman's ornament and pulled it down from the rack. "This is Zingerman's!" He said with surprise. "You know what!? I'm going to buy an ornament!--Do you tweet?" he asked suddenly, but before I could answer he said."You should tweet that your ornaments are so cool a Jew just bought one!" He pulled out his money and laid it on the table. "I'm a Jew" he said to a woman passing by, "And I'm buying a Christmas ornament! And now I'm going to call a friend of mine and tell him too." he said pulling out his phone. I wrapped his ornament as he told his story to his friend, holding the phone out to us for verbal confirmation. "And now, I think I feel like singing a Christmas Carol." he said turning to me again. "What shall we sing?" I suggested Silver Bells, as that was actually written by a Jewish composer. My friend and I started..."Silver Bells..." He echoed, "I'm a Jew..." we continued "It's Christmas time in the city." He continued singing in tune. "I'm a Jew....I don't know the words." I wish I had it all on video. It would have been wonderful to post it on youtube. It was wonderfully refreshing to be totally socially incorrect and to be able to wish a Jewish man Merry Christmas.