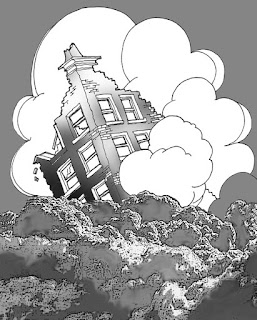 DESTRUCTION
A long time has passed. Nearly two years have gone by since my last entry into this blog. A short list of events tells you why:
• House sold for a loss, gave 1/2 of everything I had away..
• Had no home for several months, lived in a rented art studio and a friend's pool house.
• Father died.
• Established new friendships in a new city.
• Bought a much smaller house (1/3rd the size) on some land far from the city.
• Built an art studio
• Painted 15 murals
• Learned WordPress for building websites and designed 4 sites
• Changed the way I did business
• Published another book (the illustration above is from this book entitled: Life is Wonderful, It could be Verse!, By Art Holst) You can see it on my website at www.katherinelarson.com
• Found God again.

Sometimes you have to tear down everything you think you wanted and start over again. Sometimes it's life that does it to you, and sometimes you have to do it yourself. As a writer, painter and singer, these acts of destruction are required quite often. But the ability to do them rests on how stable the rest of your life is. This is the first time in my life that I have "subtracted" from what I was building, making, collecting...amassing. And I have to admit that it was very painful during the process. However, as I got further along, it began to get easier...quite literally lighter. My head was less cluttered with chatter, decisions became easier, goals became clearer.

As the dust from the rubble cleared, it was easy to sweep all the destruction away. Easy to start over, wiser now, more certain of what was needed and what was burdensome. His yoke is easy, his burden is light.