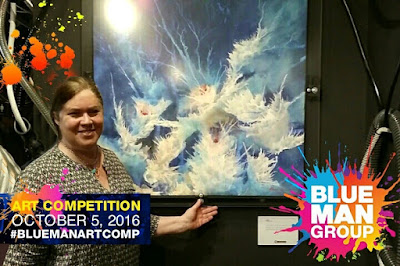 What a blast this was! I was notified about a month ago that my artwork won the Blue Man Group's Art Competition. They asked that I not post anything in social media about it until after the unveiling on Wednesday of this week. There was a notable cash prize, as well as a 10 ft x 10 ft blow-up of my artwork on the side of the Blue Man Group's theater in Chicago. And the original hangs in their lobby (photo above). The winning artwork fits their quirky performances that utilize splattered paint and other performance arts. We were told that there were 776 entries in the competition. I'm honored that my painting was one of the six winners!

I saw the Blue Man Group perform many years ago and was struck by their grasp of what makes us human. The large screen behind them, giving instruction, is very clever in pointing out attributes of human nature that we take for granted. It's amazing to me that we are looking at artificial intelligence coming into our lives today with driver-less cars, robotic dogs, drones and even more things are on the way in short order. At the time, I thought that the Blue Men were way ahead of their time...but in hindsight, they were only a few years ahead. The real A.I. is with us already. Personally, I prefer the Blue Man Group!

I made the decision to go to the unveiling of the artwork at the last minute. I was so glad I attended. The Blue Men did a special "art" themed performance for us and then we got to go on top of a double decker bus and get our photos taken with them. If you have a chance to get to Chicago, or to see one of their traveling show, it's worth the time. It will make you think deeply about what it is to be human. 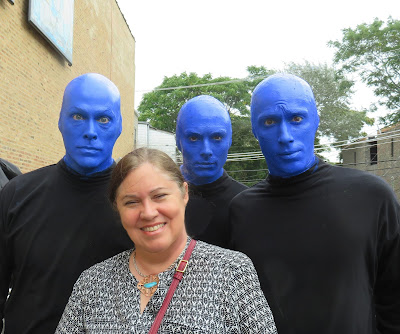