One Woman's Adventures in the U.P. 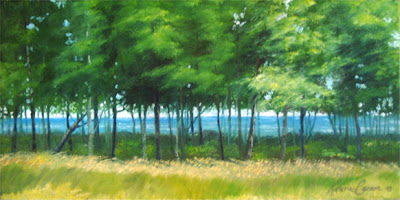 Mid-winter last year, I received an email that I had been choosen as one of the Artist's in Residence for the Porcupine Mountains in Michigan's Upper Pennisula. The award came as a surprise. Although I had applied for it, I never really expected to be chosen. So getting it put me a little off balance. Two weeks all alone in 40,000 acres of wilderness...I wasn't too sure I was ready for it.

I have spent some time in a tent, so it wasn't the logistics that were concerning me. It was leaving the comforts of home and all things familiar and putting my clients and work on hold that worried me the most. In retrospect, it was the best thing that could have ever happened to me. I began my journey with the intent of interpreting nature and putting it into a visual context. I ended with nature's quiet observance giving me a reflection of myself...a reflection that I wasn't too sure I liked.

I'm sure you've seen a film or two where the action is going at full speed and then suddenly it's slowed down to very slow motion and you can see every detail. That's what happened to me after driving the eleven hours that it takes to arrive at the Porcupine Mountains. I called it decompression at the time, but it's more like being slowed down from the daily pace you are accustomed to experiencing at every moment in the "civilized world" to a painfully reduced speed. A pace that feels almost like you aren't moving forward at all until you adjust to it. Then, it feels right; like something that you've known all your life, but had forgotten. At regular speed, you can't see this. You can't see the dizzying, crazy, car wreck speed that we all travel just to keep pace. You can't see that we're all hurrying, all rushing about in a panic. It just seems normal to us, this frantic speed. Talk is excellerated, thoughts race forward, voice levels are elevated. We can't take the time to really listen to one another, because there is no time. Everyone and everything is moving too fast, we might miss something--like the beginning of a movie, dinner reservations, our place in line, our leading position on the highway. We want no one in front of us holding us back, slowing us down.

In the first few days of "slow motion," I thought, well this is temporary, I'll go back to my regular pace once I return home. But, soon I found myself driving 35 in a 55 zone, where just two days earlier I had been traveling 65. Then, to my surprise, I started taking detours from my scheduled route and often ended my day at a competely different destination than I had planned. I missed meals, because I wasn't hungry. I went to bed somedays at 5:30 at night because I was tired. Other days, I was up at 5:30 in the morning, because I was done sleeping. I turned off the car radio upon arriving at the mountains, and I never turned it on again. Well, that's not exactly true, I turned it on for about 15 seconds during my drive home, and it sounded strange to me- like someone talking into a tin can- so I turned it off again.

Although you don't feel the frantic pace we live in everyday, you definitely feel the slow-down when it starts loosening you. It's both painful and welcome, like muscles relaxing after a long period of tension. There's an ache with the loosening, but there is also relief.

I'm not really sure what causes this slow-down. Maybe, it's reducing your standard of living to what you can carry on your back. Maybe it's being made aware of everything we do to alter nature like heating and pumping water; artificially lighting the dark; preserving food with ice; making fires to keep warm and prepare food; making shelters in order to sleep and spraying on toxic mixes of chemicals to ward off insects and parisites. Maybe the slow-down is a result of finally being forced to live within nature's pace. To rise and set with the sun; to walk through the forest with one's own true stride; to accept and adapt to whatever weather presents itself; to know that you are amongst other creatures...wild creatures who aren't on leashes or in cages; and to finally release the fantasy that you are in control.

Spending time in the wilderness by yourself is a singular experience. There is nothing to compare with it. There isn't another person to give back a familiar reflection. To say to you, yes you are you...you are still who you were yesterday. I recognize you, I know who you are.

You are a stranger to the woods. And you soon become a stranger to yourself. Muscles are challenged, the body transforms and adapts to the loss of comforts. Temperatures can fluctuate up to 50 degrees in the course of a day. This is normal for the forest, but I was never aware of it in my temperature controlled home and car. Hunger or thirst can come upon you at anytime. The body pays no heed to your scheduled lunch hour, or dinner time, or the fact that you only brought one liter of water on your hike. You learn to listen to your body...to really listen. It becomes your number one ally upon which you rely for travel as well as survival. And it helps you find what you need to revive yourself--thimble berries, wild raspberries or a natural spring.

Your mind also transforms and adapts to the loss of distractions and negative resources available to it in regular life. With no one around to blame for a difficult circumstance in which you may find yourself, you have two choices: 1. put up with the self-incriminating, negative voice in your head, or 2. put your brain to work finding a way out of your circumstances. Fortunately, it didn't take long for me to see the futility in pursuing the negative talk. And, it was as if the brain rewired itself instantaneously into my new "positive assistant" and has remained in this role ever since.

But probably the greatest transformation has been the loss of fear. The first few days, I felt as though the forest was watching me, studying me and my feeble attempts to appear "at home." It knew I was petrified of the dark. And, you have never experienced dark until you've been in an old-growth forest. The first night, I awoke in the middle of the night and felt the urge to go, but I just told myself it could wait until it was light. I laid there in pain for four hours waiting for daylight. I had a tremedous fear of something coming upon me that I couldn't see. But, after my second night in the tent, that all changed.

The light and sound show started about 10pm and lasted most of the night. The tent was buffeted about by wind and a torrent of rain. Lightening split the sky with frightening brilliance, followed closely behind by deafening thunder that actually shook the earth below me. As my father had taught me as a child, I counted the seconds between the flash and thunder. Flash...one thousand one, one thousand two, bang. Flash...One thousand--Bang! Crrraaash! The earth shook below me in the tent. I knew a tree had been hit close to where I was. I held my breath, waiting for the next flash. It came, but was followed several seconds later with a quieter rumble. The downpour slowed down to a light rain a few minutes later. Then there was just the sound of drops falling from the tree tops. It was pitch black outside, except for an occasional flash of lightening, but I put on my rain slicker and went fearlessly out into the night. For me, fear of darkness was simply a matter of degrees. The frighteningly close lightening strike had lowered the "darkness" fear factor by several degrees. Since that night, I no longer fear the dark.

The forest has changed the way I look at, appreciate and understand things. I am in awe of running water from a faucet. I don't think I'll ever be able to take a truly hot shower again, because I've come to love the way cold water is actually warmed by my own body's heat as it pours over me. I'll never be able to listen to the radio, the television, my cell phone or a recording without hearing the "fake" tinny, mechanical sound that they all make. The buzz of a refrigerator, computer, or any other home appliance is unbelievably loud, (and I never heard them at all before). It's hard for me to drive above 55 now. I don't like watches, clocks or air-conditioning. I think batteries are a miracle. I can see under a moon rise, now as easily as a sunrise. I know exactly how long it takes a block of ice to melt in a cooler. And, I think that chocolate is highly under-rated as a food group.

I'll add more to this subject in the coming weeks and post some of the paintings I did while in the U.P.