Ticks in the Tent

The Continuing Memoirs
of My Artist in Residency in the U.P. 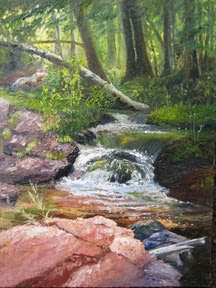 When I arrived at the Porcupine Wilderness Visitors Center, I was presented with a book about surviving in the forest. The book described, in detail, a long list of parasites and pests, including the effects of their bites, what they look like and how to get them off you once they "latch on." However, in most cases, the book described what little you could do for relief once you are bitten. I'm not sure if the book was intended as a helpful guide, or as a deterrent to those considering the U.P. as a possible retirement location. One U.P. born resident of Ontonagon told me he thanks God every day for the black fly, because it alone keeps 95% of the people away who might have made their home there.

If you want to read about the black fly, there are many descriptions of it in books and on the web. I'll just tell you that it strikes terror into the hearts of even those brave souls who live there. One native told me that she was bitten once at the corner of her eye and it caused her entire eye to swell and turn purple. The same woman had another bite inside her ear...you can imagine the pain in that! You can't see the black fly, you only know that it's visited you after it's bitten you. I got my first bite, and thank God, my only bite on the first day--behind my ear. The lingering effects of that bite remained with me until after my return two weeks later. There's no way to describe a Black Fly bite, you just have to experience one. So, I'll save you the gruesome details and hope you never have the displeasure.

What I found most amusing during my stay was the descriptions by U.P. natives of the clothing they wear during black fly season to avoid getting bitten. These oddly garbed creatures must be somewhat frightening to visitors, possibly even laughable, until they themselves are bitten. Residents described their protective gear as ranging from full body netted suits, three layers of clothing with netted head gear, helmets with nets and flip-down glass face-plates, elbow high gloves, high boots (the black flies like to bite ankles), and netted hats (flies also like bitting behind the ears). One resident said she is basically blind and deaf after doning all her gear to work in her garden in the spring.

Fortunately, the black flies depart the end of spring, but they are followed by a whole slew of other flying and crawling creatures who move in for the summer. My personal favorite is the tick. Wood ticks are the most common kind in the U.P. and although they don't carry the dreaded lyme disease, they are still pretty disgusting. The only thing satisfying about a wood tick is hearing them pop while squishing them. My third night in the tent, I turned on a flashlight to check the time and found the first tick on my arm. It hadn't "hooked on" yet, so I brushed it off with a shiver and decided I better check my dog next to me for more. To my dismay, there were three on him. But, fortunately none had hooked on, so I picked each one off carefully and killed them as the book had described. I swear the little creatures know you are coming to get them because they try frantically to dig in just as you are picking them off. Their little legs flail about wildly before death by squishing. I know this sounds cold, cruel, and disgusting but once you're in the same situation, you'll find yourself squishing them too. In all, there were eight ticks in my tent that night. I won't go into details on where I found the other four. One of my U.P. friends had told me that they crawl around sometimes for a few days looking for just the right spot to hook on, so you usually have plenty of time to find them before they do any damage. Fortunately, she was right.

The next morning, I looked around my tent to find the spot where the ticks had "dropped in" to visit. I discovered a tiny hole between the top seams in the dome. During the rainstorm it had popped open to let in anything that happened to walk by. In the morning light, I could see the undersides of several ticks walking over the lighted dome of my shelter. I quickly took a piece of paper toweling and blocked the hole. No more univited guests dropped in after that.