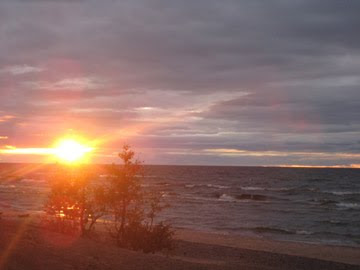 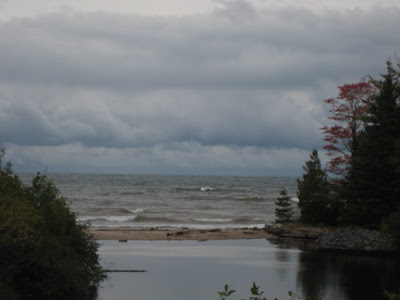 Photos taken the day after the two-day storm.

The end of September, I called a small resort in the U.P. to make arrangements to rent cabin on the shore of Lake Superior. I asked the owner what I might be able to expect for weather, as I was a painter and required at least some sunshine to do my work. The owner was a bit put off by my inquiry and told me that he couldn't guarantee the weather conditions. I assured him that I was coming anyway, but was hoping to get the best week up there for color, etc. I also asked for a cabin as close to the water as possible. He said, "all you can see from your window is Lake Superior!" So I reserved the cabin.

The drive up was great, the fall color was beautiful. I had high hopes for the week ahead. I stopped several times to take photos, so I was running a bit later than anticipated. Just as I arrived at my destination, dark clouds rolled in and the winds kicked up. People were running around frantically bringing in lawn chairs and shutting windows. The owner took me the cabin I had rented and true to his word, it was about 10 feet from the shore. "We usually close this cabin before weather like this comes in..." he said, "But that normally doesn't happen until November."

That night, deafening winds and waves crashed against the tiny cabin. The cover flew off my wall heater during the night and blew out the pilot light. I couldn't relight it. That evening, the Houghton airport reported a record low of 27 degrees.

For two days, the storm ripped against the shoreline. The wind was so strong, it could blow you over. Wind gusts reached speeds of over 60 miles an hour. Now and then, I peeked out my front window at the grey spray and amazing waves. My cabin and car was covered with a colored mosaic of shredded leaves and twigs. Even my dog wouldn't leave the cabin for more than what was absolutely necessary.

On the third day, the temperature was still in the 40's, but I ventured out as the wind was bearable. At noon, the sun broke through, and there was a festive spirit in the air. People everywhere were sharing their experiences of the last two days, some had been in tents, or backpacking when it started. Some had trees come down around them. One tree flattened a car at a hotel in Copper Harbor. Fortunately, no one was injured. My host offered to reduce my rate for the last couple of days because I had not been able to paint outside, but I told him I wouldn't have missed it for the world. It was like spending two days at the base of Niagra Falls! I truly feel blessed to have experienced the power and wonder of Lake Superior first hand.

And, then we had sun for the next two days!