Visitor in the Wilderness 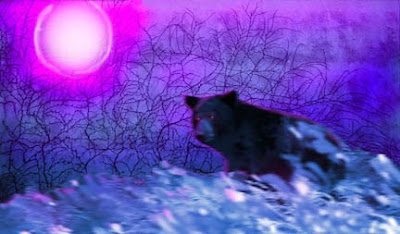 The day after the great storm, I decided to take a lightly traveled path into the Porcupine Mountains to see if there might be anything of interest to paint there. It was called "Lost Creek Trail", which should have given me some hint of what was to come. Arriving at the path, I saw no other cars in the parking lot, so I knew I would be completely alone on the path. This was nothing new for me, as I relish the opportunity to be alone in nature. I often sing at these times, as I know I won't be disturbing anyone, and I can "let loose" as I do in the concert hall, and the sound in the woods, or over lakes is fantastic.
About a half hour into the walk, I heard water rushing off to my right and decided to leave the path to investigate. It sounded like a waterfall. A little bit of background for those who don't venture off path in virgin woods very often: the ground is not solid, it feels hollow underfoot, because of thousands of years of dead trees falling and decaying one upon another without compaction. As a result, you feel as though you are stepping on a sponge filled with holes, covered by leaves.
I placed my walking stick into the ground carefully at each step until I arrived at the edge of a cliff. Below me stretched a narrow, long sunlit valley with a lively creek running through it. Water cascaded from the hillside and the ground beneath me felt slightly squishy and unsteady, like a soggy bread crust. I stepped back from the edge slightly and felt compelled to remember this moment in song. I looked around carefully to make sure I was alone. No one was there.
I chose a soprano solo from Bach's Magnificate. It sings well in the open air, each note traveling in purest clarity. The forest becomes still when I sing, as if every creature is listening. The sun broke through in the middle of the aria and yellow leaves sparkled like jewels. I finished and felt the silence around me slowly filling again with movement. I turned to head back to the path I had left behind.
The forest was dense and dark compared to the sunlit valley. I felt as though I was being watched, and my flesh began to tingle with a strange electrical current. My dog let out a low growl and the hair on his back stood up. He backed up away from the path, moving back towards the cliff. I looked hard into the darkness in front of me, attempting to readjust my eyes. I saw a solid shape, with red eyes. At first I thought it was "Big Foot"! It looked huge, and my dog had never reacted that way to anything. Without waiting to see exactly what it was, I started moving away from the path and followed instead the line of the cliff. I walked as fast as I could, still being cautious about the unsteady ground. Never once looking back, I soon found a path that I had seen on the map which crossed the stream and the valley leading to a Yurt. This lead to an old logging trail not indicated on the map. I took it, figuring it had to lead to the road eventually. My dog growled again in the general direction of the first sighting and I wasted no time in jogging out.
Safe on the road, I searched my memory of the sighting, and decided that it must have been a black bear.
Later, I decided...if Bach's Magnificate attracted bears, I would have to remember to take it off my list of woodland songs.